The Cathedral of the Assumption ot the Virgin in Dubrovnik 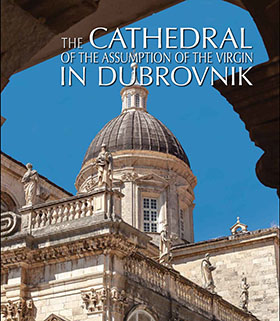 Publishing series and number
Studies and monographs of the Institute of Art History, book 46

-
This monograph brings together for the first time in one place the comprehensive contemporary litera­ture on the cathedral, interpreting this exceptional monu­ment and the entire historical and cultural complex in its regional, Adriatic, and I would say even Medi­terranean context – and not just during the emergence of the Baroque building that we see today, but also the earlier phases, which are attested to primarily by the archaeological findings. However, the book is not just a synthesis of contemporary texts and concepts. It brings to light an astonishing number of new, rigorously scientific, analytical insights on numerous problems that were previously only mentioned in passing. In a series of balanced chapters, the authors succeed in creating for the first time a complete and precise reconstruction of the chronology of the construction and furnishing of the Dubrovnik cathedral, with a convincing recon­struction of the individual building phases and an equally convincing interpretation of the genesis of the stylistic features of each of them. The book goes beyond all similar domestic publication projects and establishes a scientific paradigm that, we hope, other authors will follow in their own writing about cathedrals in Split, Trogir, Zadar, Rab, Poreč or Zagreb – to mention just a few of those that are deserving of the same scientific rigour.

For the extensive task of publishing this mono­graph, a series of distinguished Croatian experts were assembled that had already worked with monuments in the city of Dubrovnik, and in particular the architecture of the cathedral, including the history of its construction and the works of art and historical objects that are kept within the Dubrovnik Diocese. The result of their collaboration is impressive. The monograph spans 590 pages and offers a wealth of material including architectural drawings, graphic diagrams and reconstructions, photographs of architecture, paintings, sculptures and other objects and documents of artistic and historic importance. The texts in the monograph are accompanied by documentation, which enables a better insight into the themes discussed in the book. These documents contain and catalogue the artworks of the Baroque cathedral: there are 365 catalogued pieces of furniture, altars, paintings, sculptures, liturgical vestments, church bells, votive offerings, relics, liturgical objects, plaques with inscriptions on the walls of the cathedral, and books.

The Cathedral of the Assumption of the Virgin in Du­brovnik (1671 – 1713) occupies a prominent place among Croatian cathedral buildings. Emerging during the reconstruction of the city after the earthquake in 1667, the monumental three-aisled Baroque basilica with a dome uniquely combined not only the high aesthetic standards of the Dubrovnik commissioners and the Roman architect, but also the individual leaders of construction from Rome, Sicily and Dubrovnik. The interior furnishings are equally as important and exquisite – marble altars ordered in Naples, Carrara and Genoa, numerous paintings by Italian and Flemish painters as well as painters from Dubrovnik – and the special phenomenon that is the Reliquary of the cathedral with almost two hundred relics, gathered from the 10th to the 21st century. The Baroque cathedral was preceded by two older buildings – one dating from Late Antiquity / Byzantium and the other Romanesque – the archaeological remains of these churches, including frescoes and fragments of sculpture, testify to the high level of quality in the artworks of the disappeared buildings. Inspired by the high quality of the architecture and artworks, and prompted by the commission of the City Parish the Institute of Art History began to draft the monograph with experts in their respective fields. The tricentennial of the completion of the cathedral offered a strong additional motive. In addition to contemporary knowledge, the monograph includes new scientific facts based on field and archive research in Dubrovnik and comparative research in Italy. The high value of the Dubrovnik cathedral in the European context called for editions in both Croatian and English.

25
The historical interpretation of the cathedral
Katarina Horvat-Levaj, editor

69
Artwork and decoration of the old cathedrals
Igor Fisković

121
The architecture of the baroque cathedral
Katarina Horvat-Levaj

The furnishing of the baroque cathedral

215
A century of furnishing the baroque cathedral
Daniel Premerl

271
Paintings in the cathedral
Radoslav Tomić

359
The cathedral organ throughout the centuries
Miho Demović

399
The reliquary
Vinicije B. Lupis

494
Catalogue of art works in the baroques cathedral